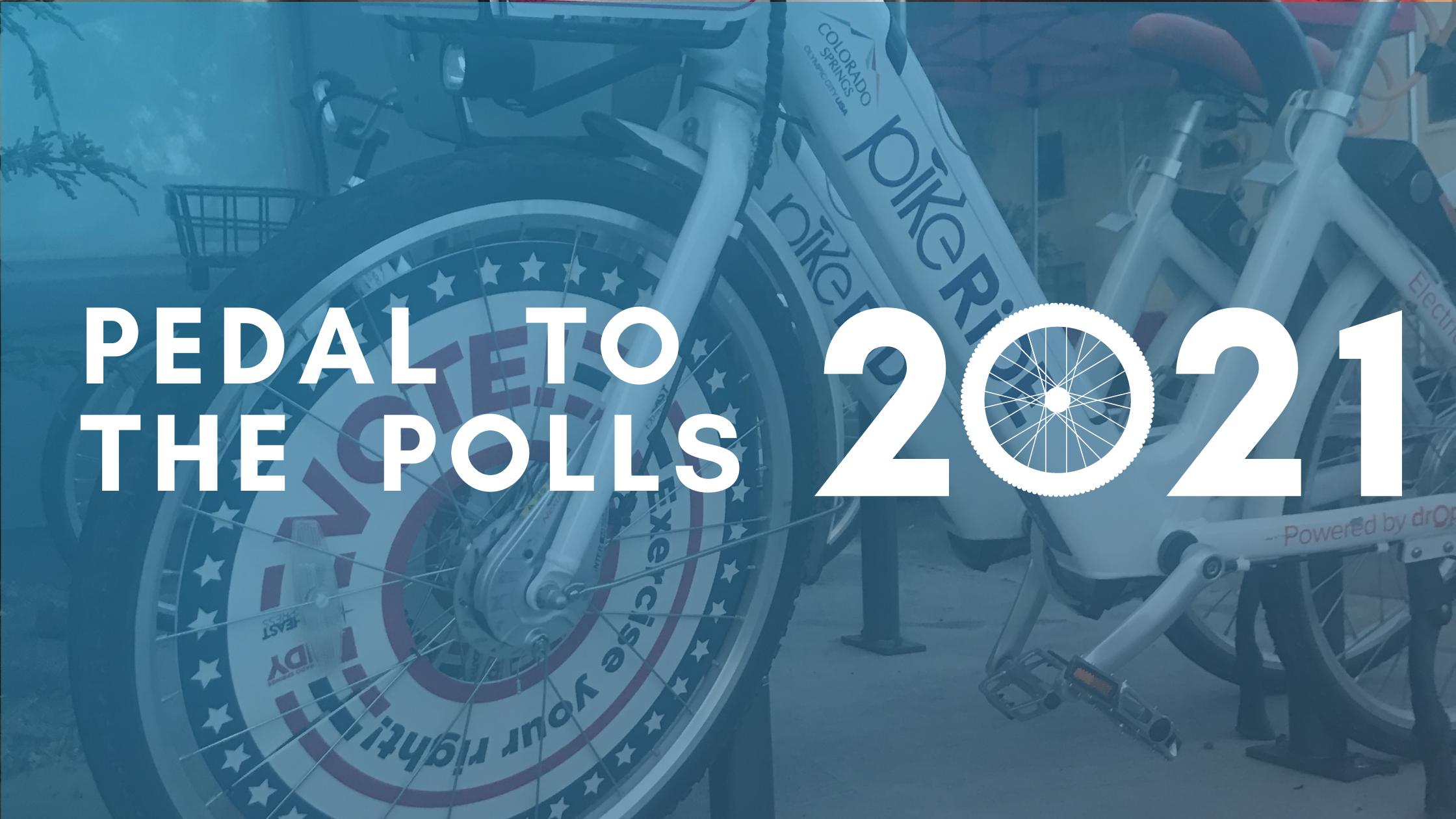 The upcoming Colorado Springs Municipal Election on April 6, 2021 will include elections for all six district level city council seats. Ballots will be mailed  March 12, 2021 and will include a choice for your council district seat and one ballot initiatives – Sample ballot viewable here. There are currently multiple surveys being distributed to current City Council Candidates. Keep reading to view candidate responses to bicycle related questions presented in other surveys.

We have distributed our survey to candidates on Tuesday, March 2nd

Please view our survey and the unaltered responses here

If you are a candidate and need access to the survey please send an email to info@bikecoloradosprings.org

The website, SpringsTaxpayers.com has sent a survey to the 2021 City Council candidates. Below is the text of their bicycle related question and candidate answers. we will continue to update this space as other organizations distribute their candiate surveys where they are related to our mission here at Bike Colorado Springs. 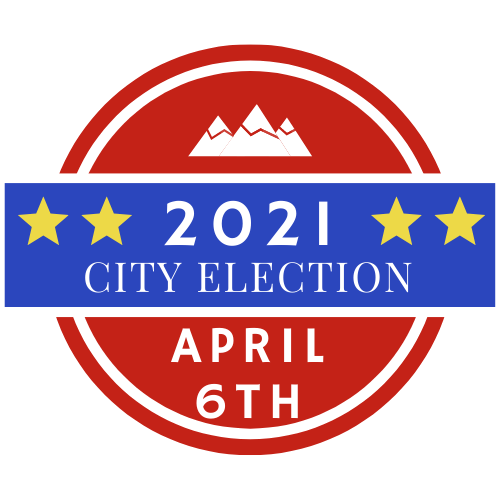 Election Day – April 6th 2021
We have compiled information from the city’s website about the upcoming municipal elections.

Redistricting Effective for 2021
Please be aware that the city of Colorado Springs recently completed a redistricting process in 2020, please confirm your district when researching the candidates.

Candidate Information
Below we have listed all of the candidates with links to their campaign websites (where available). This information was pulled directly from the City’s election information webpage and is not an endorsement of any candidate. We are simply providing information in order to better inform our readers and followers. 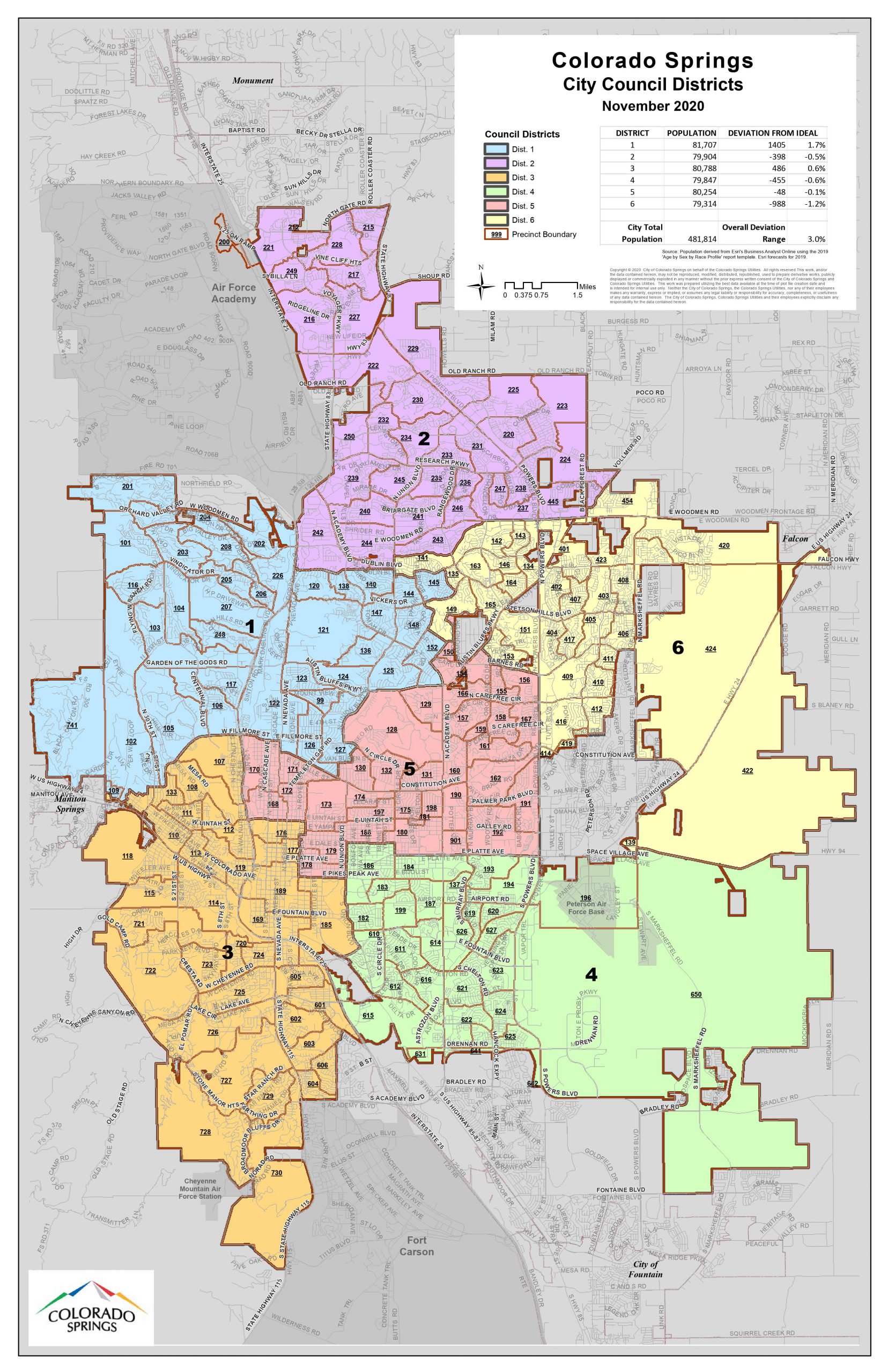 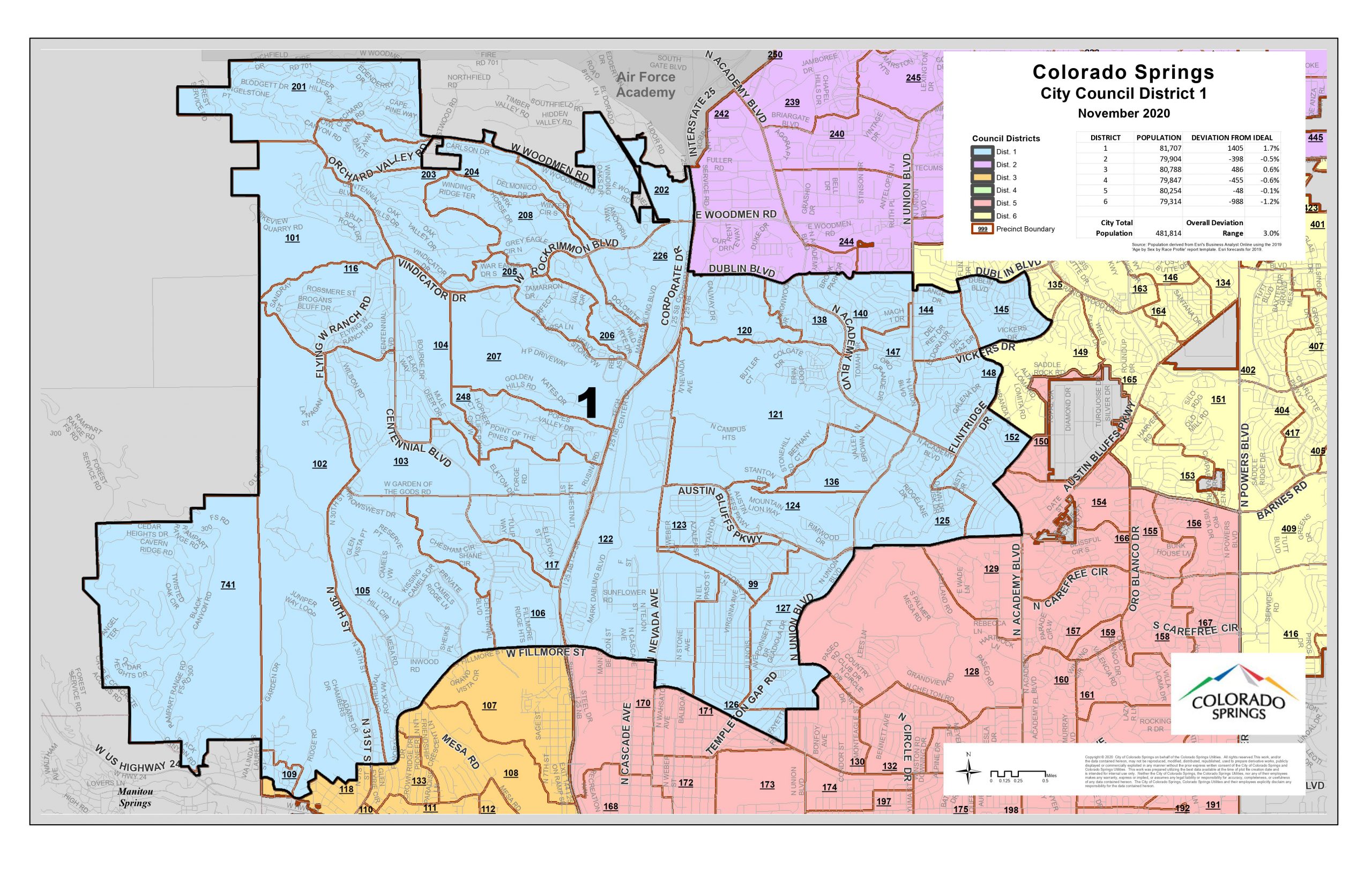 Henry McCall
No website found – Gazette About our Candidate link 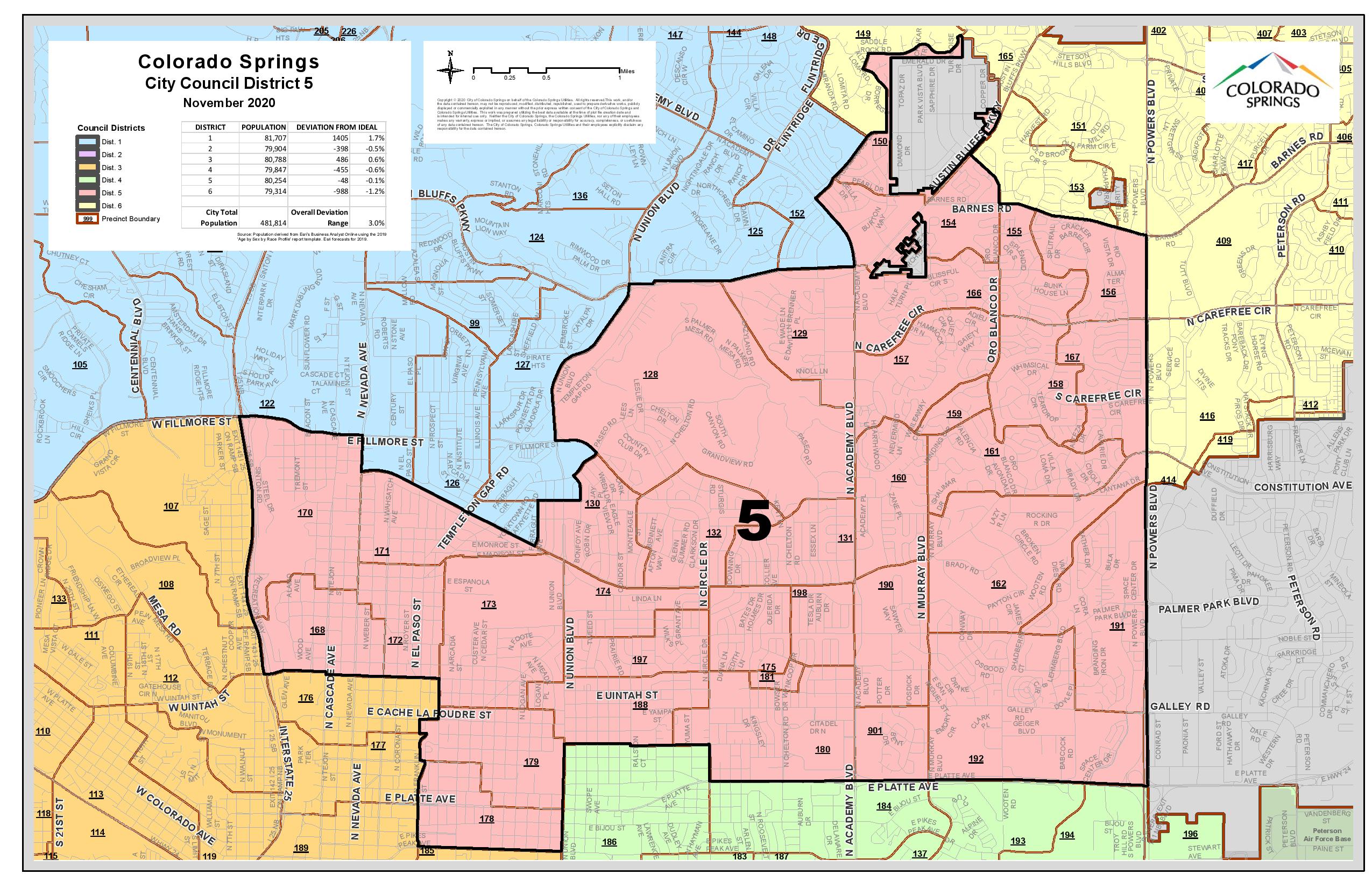 What is your position regarding the elimination of motor vehicle traffic lanes (road-dieting) in favor of installing bicycle lanes? Please explain

Jim Mason
I do not support eliminating motor vehicle traffic lanes in lieu of bicycle lanes, considering current needs and requirements. Now, if the bicycle traffic and/or there is new development, then, yes, bicycle lanes must be a component of the upgrade and street/road refresh. Bicycle lanes are a safety measure that will need to be managed in accordance with need and feasibility. Clearly, we need to provision for both as the need and opportunity present. It is not a ‘one or the other’ choice…we need both when and where it makes sense.

Glenn Carlson
I believe this makes sense in certain areas such as downtown where density is increased and the space for cars becomes limited at times. As we achieve more density downtown, bike lanes will become a premium as more people may not own/use cars or not have the need for them when they live, work, and play in a smaller radius. That being said, I am in favor of more bike paths as a whole, especially as part of a larger trail connectivity system that does not interfere with traffic, which would be a more efficient, safer example anyways.

Jay Inman
I absolutely hate bike lanes and road dieting. As business opens up and more businesses move into downtown, customers need excellent commutes and places to park. That attracts customers. Bike lanes have a place but downtown, they are a nuisance.

David Noblitt
Not good in every situation that I have seen it applied within my district. I support multi model transportation, and the Springs needs access to provide for safe foot and bicycle traffic. Taking lanes away from streets while traffic is increasing due to population growth is not the answer that is needed.

Randy Helms
I am against road-dieting on existing lanes especially on existing parkways and Blvds. I can support bike lanes if built into new roadways and they don’t affect traffic and safety.

Dave Geislinger
I do not support constructing bike lanes on existing streets for the sole purpose of constructing bike lanes, but when citizens and neighborhoods complain about speeding, street racing, excessive traffic and other traffic safety issues, we must be responsive to their complaints. Road dieting is a proven means to address these types of safety concerns. For instance, while commuters complain about bike lanes on North Cascade, we received overwhelmingly positive support from the residents who shared that they, and their children, can now use their neighborhood sidewalks without fear, and that it has become more livable as a result of the reduction in lanes. The public process involved in North Cascade worked, despite the initial complaints of commuters, because the narrative was properly focused on neighborhood safety. I do not think the narrative was as properly focused with regard to the bike lanes on Research which were constructed before I was a member of Council, and because of this the traffic concerns on Research are still not addressed.

Richard Skorman (Incumbent)
I am in favor of doing only in places where there is not much traffic, a good amount of bike use and/or it would help with speeding in areas where children and pedestrians frequent. I am not in favor of placing on every new street, or on any major arterial.

Art Glynn
After talking with a great number of residents affected by the “road dieting”, it was interesting to note that even those who agreed with the bike lanes were taken aback in that they were not given sufficient opportunity to state their positions either for or against. The consensus was that City Council acted on its own accord with the notion that they knew what was best for the community. Unfortunately, bike lane is barley use and the congestion in the Old North End has only gotten worse, raising community tensions pitting neighbor against neighbor. Had City

Council openly listened to local constituents and heeded concerns, the results may have been different. This is a lesson on what not to do and I firmly oppose the elimination of motor vehicle traffic lanes.

Olivia Lupia
I do not support the forced sacrifice of our existing thoroughfares or parking for initiatives such as bike lanes. This is not a practical effort for a vehicle-dominant city with a climate that truly does not allow for year-round use of bike lanes.

No Responses as of Mach 9th

Matt Zelenok
We need a comprehensive plan for bike lanes in Colorado Springs. To mindlessly delete road lanes in a high traffic area such as Cascade Ave through the downtown area is a great example of the “READY – FIRE – AIM ” tactic used in our government. We must be cognizant of the benefit and costs of every action we make in city hall. Likewise, it will be crucial to examine the “value added” of these decisions.
Does constricting traffic flow in a high volume area benefit ALL of our citizens when only 0.5% ride bicycles consistently? These are the questions I will ask our mayor and our city council once elected – are we keeping everyone’s best interest in mind?

Nancy Henjum
Bike lines and other multimodal transportation have a place in ConnectCOS and as a part of an integrated development and transportation plan for our city as it grows. Whether to eliminate or convert specific lanes of traffic depends on the roadway under consideration. The City has committed to becoming a Gold-Level Bicycle Friendly Community. As Olympic City USA, Colorado Springs is home to the U.S. Olympic Committee, USA Cycling, the Colorado Springs Olympic Training Center, and the U.S. Olympic and Paralympic Museum. We need to examine changes in transportation infrastructure from a systems-wide perspective as we consider how our city grows and how we ensure that our neighborhoods remain strong and we are aligned with our claim as Olympic City USA. We need increased bicycle related education and encouragement efforts, stronger traffic enforcement, and better planning and evaluation processes are needed.

Justin Hermes
Only .5% of Colorado Springs citizens commute to and from work on a bicycle. I think way to much time and effort was put into expanding the bikes lanes. I do agree we need more bike lanes in certain areas but the way they were implemented and the time and energy spent on this topic was concerning.

Mary Elizabeth Fabian
As someone who works downtown daily, bike lanes are a headache that I do not enjoy. I do believe that with a tourism mindset they could be a benefit in certain areas. However, neighborhoods need to support and promote this from within, not have it mandated from the top down. I believe the current bike lanes should be part of a comprehensive plan to see if they make sense and add to our transportation goals, if they do, they should stay and if not, they should be converted as long as it is financially sound.

Karlie Van Arnam
I don’t believe increasing bike lanes through road dieting is going to reduce the dependence or need for personal vehicles in any meaningful way. Bike lanes have their place in certain areas with high “walk scores,” but it is not a one-size fits all issue. I believe future development should prioritize walk ability and bike ability, in which case bike lanes are necessary to ensure safety for our bikers and drivers.

No Responses as of March 9th

As you may have heard Transit mix, The owner of the pike view quarry in…